Do NOT let them read about penguins!

Today in Children’s Literature we briefly discussed the new kid’s book that is apparently stirring up a lot of controversy. It is called And Tango Makes Three, and it’s about two penguins raising a baby penguin. You may be asking yourself, “what’s the problem with that?” Well, both of the penguins are male. Instead of trying to summarise the story myself, I’ll just let you read the excerpt from a School Library Review:

This tale based on a true story about a charming penguin family living in New York City’s Central Park Zoo will capture the hearts of penguin lovers everywhere. Roy and Silo, two male penguins, are “a little bit different.” They cuddle and share a nest like the other penguin couples, and when all the others start hatching eggs, they want to be parents, too. Determined and hopeful, they bring an egg-shaped rock back to their nest and proceed to start caring for it. They have little luck, until a watchful zookeeper decides they deserve a chance at having their own family and gives them an egg in need of nurturing. The dedicated and enthusiastic fathers do a great job of hatching their funny and adorable daughter, and the three can still be seen at the zoo today. Done in soft watercolors, the illustrations set the tone for this uplifting story, and readers will find it hard to resist the penguins’ comical expressions. The well-designed pages perfectly marry words and pictures, allowing readers to savor each illustration. An author’s note provides more information about Roy, Silo, Tango, and other chinstrap penguins. This joyful story about the meaning of family is a must for any library.

Many individuals have commented about how loving and caring this story is, and how their young children were enchanted by the tale and the beautiful illustrations. Some particular remarks include: “…the penguin chick…had me smiling from page one;” “the love [the two male penguins] have for one another is so touching and natural;” and that it is a “wonderful way to introduce children to the concept of different types of families!”

With so many people that obviously treasure the book, and so many kids that love it, what is the problem? The problem is that Bible-thumping Neo-Nazis come along and feel the need to trash any piece of art that they don’t understand. To illustrate this point, I have included some of their remarks in full quotes from Amazon.com:

On the surface this book looks warm and docile. But the assumptions one has to buy into when embracing the message of this book is a problem. The animal world is supposed to define for us how to live life? The premise is if there is homosexual behavior in the animal world then it should be okay for us to be homosexual also, since we’ve all descended from animals. But animals also kill and eat one another. When humans do that should we say that’s alright too? Animals rape one another. Should we now conclude that since this takes place in the animal world rape is now okay for humans? How come homosexuality is the only thing we should take out of the animal world? It would be impossible to be consistent with the premise of this book. It is based on flawed and incomplete thinking. I can’t believe it is being offered as a book for children. It is obviously a propaganda piece for the homosexual movement to soften children’s resistance to homosexuality.

Thank you Nelson for proving your intolerance for things that you obviously don’t understand. I believe a more appropriate title for your entry would have been “Flawed logic in my so-called argument.” Clearly, there is some type of misunderstanding regarding previous arguments supporting homosexuality. Few people arguing that homosexuality is genetic by pointing to its prevalence in the animal kingdom would jump to the erroneous concluding claim you’ve made. You’ve not only committed the logical fallacy of the “slippery slope” argument–which states that many harmful events would occur simply due to a certain premise–but you’ve also begged the question by initially assuming that homosexuality is unnatural. Lastly, regarding the final comment about the books intentions to “soften children’s resistance to homosexuality,” I guess Mr. Card is implying that it would be better to teach our children to hate gays? Forget love; forget tolerance; let’s teach hate!

Here’s another aspect of the argument:

Once again, the homosexual agenda is trying to continually bombard our society in hopes that we will accept their lifestyles. Children are to be raised the way God wanted them to be raised, by a Mother and Father (Woman and Man). Like the saying goes. Tell a lie often enough and it will become the truth.

Do you hear that in the distance? What is that they’re chanting? “The Communists are coming to take over the US!!!” Simply change the word “Communists” to “homosexuals” and you’ve identified the parallel of this particular argument. We’ve simply had a paradigm shift from the “Red Scare” to the “Fag Scare.” I also love how S. Matranga feels that he or she can speak on behalf of his or her God. That’s quite a bold and daring claim! Just my personal opinion, but I feel that a loving God would rather have a child raised by two caring homosexual parents rather than two abusive heterosexual ones. I, however, can’t speak on behalf of a deity, whether it be the Judeo-Christian, Muslim, or even Satanist one. My personal favourite part of this particular review though, is the last line. “Tell a lie often enough and it will become the truth.” Assuming that one’s argument is correct even before substantiating it is the epitome of arrogance. This statement is nothing more than an elusive version of ad hominem.

I would go further with my argument, but another reviewer so eloquently worded it that it would be horrible of me to paraphrase it. In response to the above review by S. Matranga, Megan M. Conley said:

~sigh~ How sad that this country still hasn’t grown up and moved beyond attitudes such as this one. You’d think that the fact that homosexual orientation is showing up in nature in animals other than humans would help people understand that this is the way people are born, as opposed to some misguided “agenda”. I will sum up the “homosexual agenda” as this: help people understand that there is diversity in a human population, and that people different from yourself still deserve respect and compassion, even if you don’t understand why they are the way they are.

I agree with Miss Conley’s argument because she doesn’t fall trap to any particular logical fallacies, nor does she try to boldly claim that she is absolutely right beyond a shadow of a doubt. She leaves the option open that she could be mistaken. She’s not claiming that people are sinful or evil, but rather, she’s trying to show how diversity is present in humanity, and that diversity should be respected even if it isn’t understood.

Elizabeth Howard and G.C. Picchetti both had more aggressive arguments, but they had one central theme that I find to be beneficial to discuss. They wanted to know why any parent could legitimately teach their children to hate other people. I would be interested to know the thought processes behind this agenda as well.

Picchetti ended his argument with a somewhat ad-hominemic statement, but one that I think should be mentioned solely as retort to the other personal attacks:

How did a bunch of narrow minded bigots sell themselves not only as Christians but the moral police of the world and get away with it?

Trey Parker and Matt Stone made a politically satiric movie about a similar topic. The emphasis has shifted from political police to moral police, and once again, Americans are comprising the entire task force. Have we again become the laughing stock of the planet?

I guess the moral of this particular story is:

DO NOT let your precious children read about penguins! 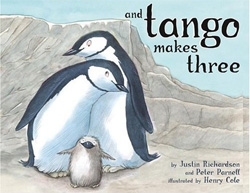 Those who educate children well are more to be honored than parents, for these only gave life, those the art of living well.