My tech articles—especially Linux ones—are some of the most-viewed on The Z-Issue. If this one has helped you, please consider a small donation to The Parker Fund by using the top widget at the right. Thanks!

Recently I was on a mission to make my audio experience on my main desktop more enjoyable. I had previously just used some older Bose AE2 headphones from 2010 plugged in directly to the 3.5mm audio output on the back of my desktop. The sound quality was mediocre at best, and I knew that a combination of a Digital-to-Analogue Converter (DAC) and some better headphones would certainly improve the experience. I also knew that the DAC would probably yield the most noticeable improvements, so I purchased the Big Ego USB DAC from one of my favourite audiophile-grade manufacturers, Emotiva. I have several of their monoblock amplifiers and use their amazing XMC1 for my preamp/processor in my home audio system, so I knew that the quality would be outstanding, especially for the price. 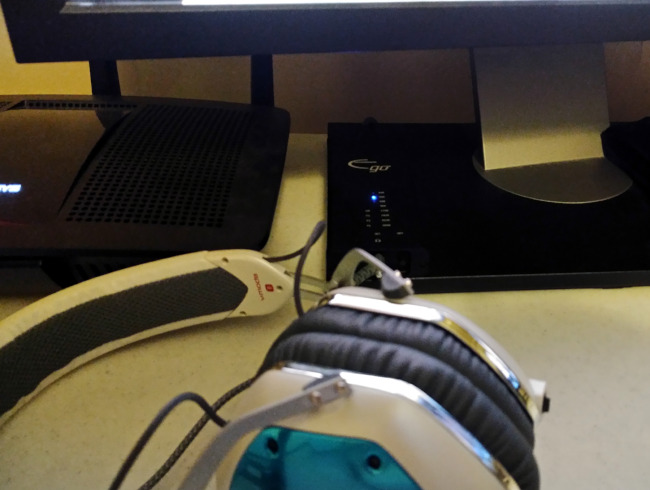 Now, the Big Ego FAQ on the Emotiva website indicates that it should work with all modern computing devices:

Q: What devices can I use the Ego DACs with?
A: The Ego DACs are basically designed to work with any modern “computer device” which can be used
with an external USB sound card, which includes:
1) All modern Apple computers
2) All modern Windows computers (Windows XP, Vista, 7, 8.0, 8.1, and Windows 10)
3) Many Linux computers (as long as they support USB Audio Class 1 or 2)
4) Some Android tablets and phones (as long as they support UAC1 or UAC2)
5) Apple iPhone 5 and iPhone 6 (with the lightning to USB camera adapter)

For many Linux users, the Big Ego probably works without any manual intervention. However, if it doesn’t, it shouldn’t be that difficult to get it working properly, and I hope that this guide helps if you are running into trouble.

Firstly, let’s get something out of the way, and that’s USB Audio Class 2 (UAC2) support within Linux. With all modern distributions (>=2.6 kernel), UAC2 is readily available. It can be validated by looking at the audio-v2.h file within the kernel source:

Feel free to look at the full file to see the references to the UAC2 specification.

Secondly, and also speaking to the kernel, if your distribution doesn’t even show the device, you are likely lacking the one needed kernel driver. To see if your system recognises the Emotiva Big Ego, try the following command and look for similar output:

The full identifier (Vendor ID and Product ID) from lsusb is 20ee:0021, even though it doesn’t have a description:

If you don’t get similar output, then you’re lacking kernel support for the Big Ego. The one driver in the kernel that you need is the “USB Audio/MIDI driver” which can be found in the make menuconfig hierarchy as:

You can also check your kernel .config for it, or if you have it as a module, load it: 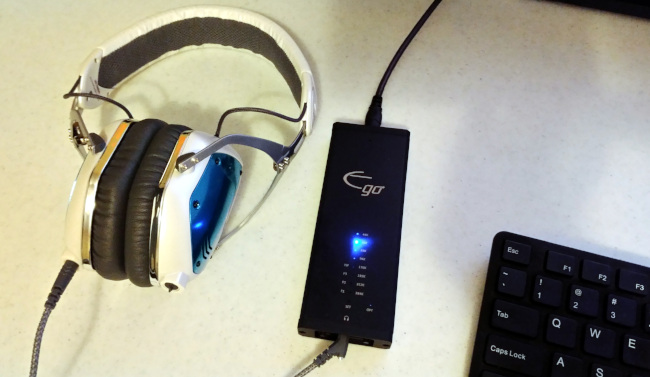 Thirdly, and now that you have the appropriate kernel support, let’s move on to configuring and using the Big Ego with ALSA. You can see a list of device names by using aplay -l, and it’s best to address the device by name instead of number (because the numbering could possibly change upon reboot). This one-liner should show you precisely how it is named (note that your output may be different based on the available sound output devices on your system):

With that information, you are ready to set the Big Ego as your default sound output device by editing either .asoundrc (in your home directory, for a per-user directive) or within the system-wide /etc/asound.conf (which is the one that I would recommend for most situations). I tried various configurations for my ALSA configuration, but would end up with various oddities. For instance, I ran into a problem where I had sound in applications like Audacious, mpv, and even ALSA’s own speaker-test, but had no sound in other terminal applications like ogg123 or, more importantly, web browsers like Firefox and Chromium. The only configuration that worked fully for me was:

After changing your ALSA configuration, you need to reload it, and the method for doing so varies based on your distribution and init system. For me, using Gentoo Linux with OpenRC, I just issued, (as root), /etc/init.d/alsasound restart and it reloaded. Worst case, just reboot your system to test the changes.

Now that you have it set as the default card, applications like alsamixer and such should automatically choose the Big Ego for your levels and mixing. One thing that I noticed with alsamixer is that there are two adjustable level sliders: 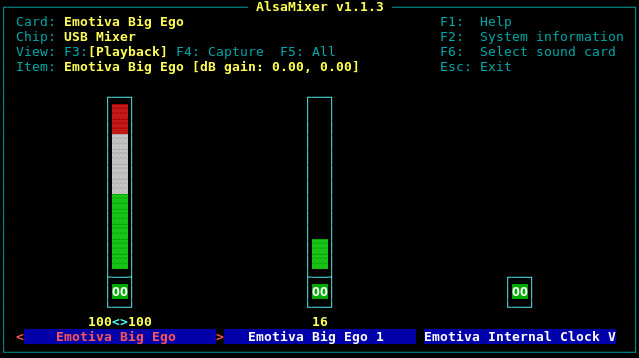 Now that we have configured ALSA to use our USB DAC as the default sound card, there are some additional things that I would like for my convenience. I prefer to not use a full desktop environment (DE), but instead favour a more minimalistic approach. I just use the Openbox window manager (WM). One of the things that I like about Openbox is the ability to set my own key bindings. In this case, I would like to be able to control the volume by using the designated keys on my keyboard, regardless of the application that is using the USB DAC. Here are my key bindings, which are added to ~/.config/openbox/rc.xml:

Take note that the subdevice is ‘1’ (bold in the code above). That is because, like I showed in the alsamixer output, I’m using the headphone jack (so it corresponds to the secondary volume slider).

I hope that these instructions help you get your USB DAC working under Linux, but if they don’t, feel free to leave me a comment here. We’ll see what we can do to get it working for you. One last note is that I experienced some rather severe popping and other undesirable sounds when I had the Big Ego plugged into one of the USB2 ports on the back of my tower. Swapping it to its own non-shared USB3 port fixed that problem. So, if you have it plugged into a USB hub or something similar, try isolating it. Remember, it is a sensitive piece of audio equipment, and special considerations may need to be made. 🙂

I am against religion because it teaches us to be satisfied with not understanding the world.