Overall, I’ve been quite happy with my 2017 Honda Civic EX-T. However, there are some cosmetic changes that I personally think make a world of difference. One of them is debadging it (or removing the “Civic” emblem from the back). Another area for improvement is to swap out the side markers, which by default (and according to law in most of the United States), is amber in colour. As it is the only area on the car that is that gross yellow/orange colour, I thought that it could be vastly improved by swapping it to either clear or some smoked black look. Initially, I ordered the ASEAN market OEM Honda clear side markers on eBay. However, I decided that on my White Orchid Pearl Civic, “smoked black” may look better, so I ordered them instead. Here’s a before-and-after of it:

Following the great instructions provided by a CivicX forum member, I got started. Though his instructions are spot-on, the procedure for swapping to the non-OEM smoked markers was actually a little easier. Basically, step 4 (cutting the tabs on the socket) was unnecessary. So, a simplified and concise list of the steps required for my particular swap is:

The only caveat I found is that the marker on the passenger’s side did not seem to want to snap into place as easily as did the one on the driver’s side. It took a little wiggling, and ultimately required me to press more firmly on the marker itself in order to get it to stay put.

For a process that only took approximately 30 minutes, though, I think that the swap made a world of difference to the overall appearance of the car. I also am happy with my choice to use the white LED bulb, as it shows quite nicely through the smoked lens: 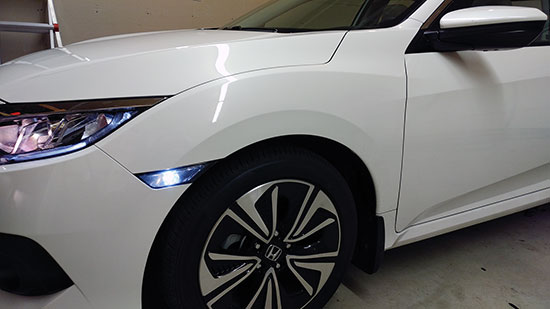