Ever since moving out to The Triangle area in North Carolina, I’ve been searching for good doughnut shops. The only places that I could find were the huge corporate chains like Dunkin Donuts and Krispy Kreme, which are bearable and downright awful, respectively. I also found some regional chains, but they weren’t much better.

The types of doughnuts that I really like are the ones that are made by independent bakers who really appreciate their craft, and spend countless hours perfecting new and enticing flavours. A couple months ago, I found that Rise Biscuits and Donuts would be opening, and got to attend two samplings. However, they won’t be officially open until sometime in October, after I’ve already left the area.

Unfortunately for me, I just found out about a place that has been a staple of the Durham Farmers Market for quite some time–Monuts Donuts. Though there is not a bricks-and-mortar store, owner and baker Lindsay, travels around the area with her cart and trike. This type of doughnut shop is exactly the type that I like, so naturally, I had to try them. Yesterday, I showed up a little before 08:00 to get some of that day’s offerings. Though she had quite a few types, there were two that jumped out at me: the peach cake doughnut, and the Dulce de leche yeast doughnut: 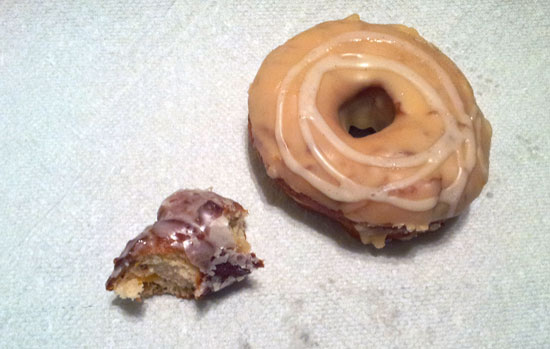 Sorry about the photo not really showing the peach cake doughnut all that well. I wanted to take a quick bite, and then I was going to take a picture of the two. However, one thing led to another, and I just couldn’t help myself; the doughnut was just that good! I generally prefer yeast doughnuts, but this cake doughnut was so perfectly made that it took the cake (yes, yes, pun intended :razz:). It had a very delicate peach taste, and a lovely light glaze atop. However, what made it perfect was the consistency; the edge was golden brown and had a slight crunch to it, but the inside was incredibly moist and spongy. The Dulce de leche doughnut was also quite good (and the texture there was very delicate as well), and had I not just eaten the perfect cake doughnut, I would have given it a 10 as well! The caramelised sugar and cream-flavour paired beautifully on the doughnut, and it wasn’t overly sweet.

I hope that Monuts is able to move into a full-time store at some point, so that more people in the area can become acquainted with their outstanding creations! The only thing that could have made the experience better is if they would have had the two doughnuts that I really wanted to try: a red velvet cake doughnut, and a toasted Amaretto yeast doughnut. As I am moving on Friday, I don’t know that I will get the joy of experiencing either of those, but I’m willing to bet that they are fantastic! So, if you’re in the area, make sure to go see Lindsay and crew on the Monut’s Trike. If you appreciate quality doughnut craftsmanship, you will be quite pleased. I’d even venture to say that you’ll go nuts for Monuts Donuts. 🙂

All religions are founded on the fear of the many and the cleverness of the few.