I am continuously on the lookout for new products that are healthy, yet still have some type of taste. Seeing as I generally watch my fat intake (especially saturated fat) more than anything else, I look for foods that are low in fat, even if they are a bit higher in carbohydrates, calories, sugars, et cetera. One of my favourite brands of healthier snacks is Kashi, and I particularly like their snacks (as opposed to their cereals or other meals).

At the same time that I purchased the Banana Chocolate Chip Soft n’ Chewy bars, I picked up a few boxes of their soft cereal bars (in different flavours). One of the flavours that’s currently available is Cherry Vanilla, and I hope that it is one they decide to keep making for a long time! 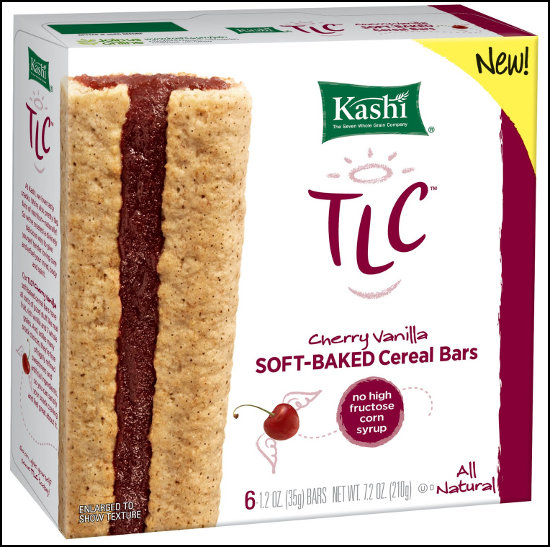 These bars have a great flavour combination with the prominent cherry, and a subtle vanilla taste. Normally, an after taste has a somewhat negative connotation, but in this case, I think that the vanilla after taste is very nice. The two flavours go together very nicely, and it’s not a combination that I’ve seen in cereal bars from other companies. The bars are a little bit dry by themselves (but I find most cereal bars to be that way), but that is easily overcome with either a glass of milk or by putting the bars in the microwave for ten seconds or so.

The bars are 35g, have 120 calories (30 from fat), and 3g of total fat (0 saturated / 0 trans). There are 3g of fibre per bar, but it is all insoluble fibre (though that is great for digestion). They also have 23g of carbs, 9g of sugars 2g of protein. For those watching carbs, they might not be the best choice, but then again, cereal bars in general are relatively high in carbs. Overall, I find them to be a fairly nutritious way for me to snack, and to have something that satiates my need for something sweet at the same time. 🙂