As summertime nears its peak, and temperatures sore into the high mid-to-high 30s, many of the local wine shops are focusing more on crisp, refreshing whites and rosés than on heavier reds. Though I strongly prefer deep, dry reds, it is nice to experience some of the others of which I wouldn’t typically purchase bottles. This week at HV Bottle Shop, the emphasis was on rosé. In fact, all five of the wines fell into the category, though they were each a little bit different. 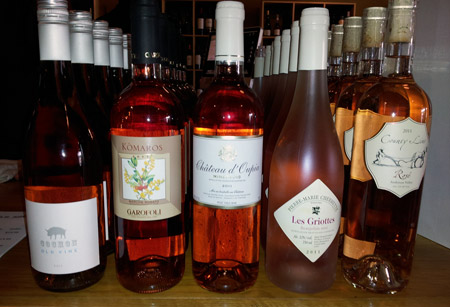 The first wine of the day was a 2011 Rosé of 100% Pinot Noir from County Line in the Anderson Valley, California. Interestingly, I had never had such a wine before, and was pleasantly surprised by the body. It had thin, medium-quick legs, and a very faint pink colour–almost clear, in fact. It was highly acidic, which made it quite refreshing in this heat. The citrus (primarily lemon) in the finish was a bit odd to me, and didn’t round off the flavour profile as nicely as I think some other nuances would have. Overall, though, it wasn’t bad.

The second offering was a 2011 ‘Les Griottes’ from producer Pierre-Marie Chermette in the Beaujolais region of France (southeastern, and northwest of the Rhône River Valley). It was 100% Gamay, and was very light pink. It had significant floral and fruit aromas, and slightly thicker legs. It was light as well, but not as crisp as the Noir. Also, the prominent flavour was the wild strawberry and Morello cherry. Though it was refreshing, it almost seemed a little heavy for the heat.

The third Rosé of the day was from producer Château d’Oupia in the Minervois region of France (quite far south, bordering the Mediterranean Sea). It had a faint peach colour, which was significantly darker at the edge, and the slowest legs of the five wines today. It had a beautiful tropical fruit aroma, and a great taste of passion fruit. Considering it had one of the lowest price points (at around $10.99 USD / € 8), I found it to be one of the most enjoyable Rosés that I’ve had of late.

The fourth wine was one that, like the County Line Pinot Noir, surprised me, as it was 100% Montepulciano. Montepulcianos are some of my absolute favourites, so it was a bit disappointing that this Rosé didn’t really strike me; it seemed to lack a lot of the structure and depth of flavour that I’m used to experiencing in this great old world wine. It was from producer Garofoli, and had a very light peach colour to it. It had medium legs that were still quick, and left a solid ring. There were mild scents of strawberry and raspberry, coupled with a dry yet fruity finish. As mentioned, I was hoping for a little more substantial flavour profile from this wine.

The last wine of the day was Cochon (from producer Odisea, in Napa Valley). I recently had this wine at a previous tasting, and reviewed it in that post. However, to revisit it, it had wonderful raspberry flavours (though the producer indicated melon as well, I didn’t find it prominent) and some subtle vanilla up front. It was nice to have it again, and it solidified my previous tasting notes.

Overall, I still wouldn’t consider Rosé to be my favourite wine, but it is a very nice alternative to whites during the hot months of summer. Just as a little lesson, Rosés are produced in ways that would normally produce red wines (such as maceration), but not to the degree of reds. Those processes result in a colour ranging from a light pink to a deep salmon, peach, or even slightly orange colour. Interestingly, there are three primary methods for making Rosés:

Taste cannot be controlled by law.