Today when I woke up and went downstairs for coffee in the breakfast nook, I noticed that it was completely overcast and foggy outside. I thought to myself “what a bummer,” because today was the day we had planned on going into Hallstatt to meander and take the infamous photo of the town from the north side of it (which includes the Evangelical Lutheran Church). Luckily, though, the sun started to peak out right around noon, and it stayed out for the remainder of the day. Crisis avoided! 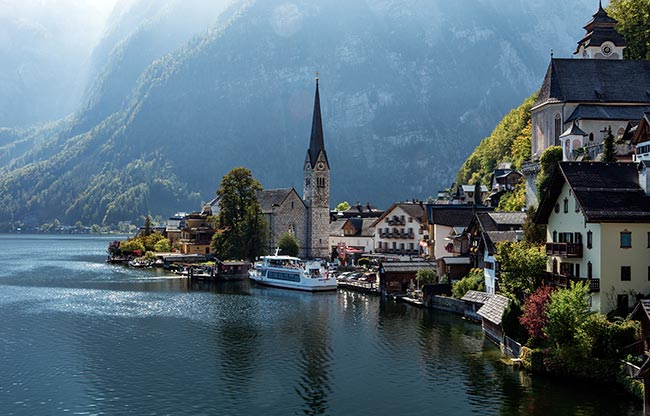 Infamous view of Hallstatt including the Lutheran church

We made our way into Hallstatt and parked in the P2 car park. The lots are generally always on the full side, and we had to wait to get in for a little bit. There are tokens that you take when you enter and you return them to a vending machine when you leave. The machine keeps track of the tokens that are in use, and can therefore determine the number of available spots in the lot. The gate simply won’t open when the lot is full. We only waited for about 10 minutes though, and were then able to park the car.

We spent much of the afternoon just walking around town (which is essentially a heavily congested tourist trap) and taking photos. Not only did we get THE photo of Hallstatt (above), but we also walked to the southern side of town and found this cute little park. From there, the views were arguably better, and there were significantly fewer people around. It was also a good place for getting a photo of this magnificent house on the eastern shore of Lake Hallstatt. 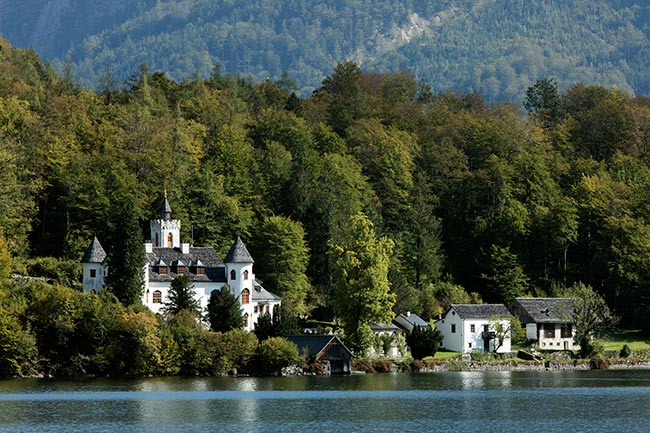 Hallstatt – mansion to the east of the lake

We spent some time walking up and down the little side streets and alleyways in the southern portion of the town, which seemed to be more residential and quiet. Though it was fun to see all the shops in the centre, this area was quite relaxing and tranquil. Best of all, there were some great opportunities for photos that could more accurately capture the quaint feel of the area juxtaposed with the grandeur of the surrounding mountains. 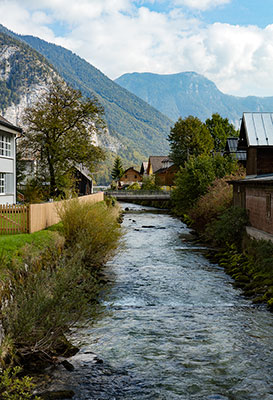 Hallstatt view from the southern portion of town

After the photo sessions, we drove up to Bad Ischl and walked around that town as well. I actually preferred it to Hallstatt by a long shot because it wasn’t as crowded and also had some lovely architecture. We stopped in at Zauner, which is a bakery and cake shop. We picked up a slice of their signature Sissy cake as well as this strange looking pastry ball, which turned out to be filled with chocolate marzipan. We bought them so that we could have dessert back in our room later that night. 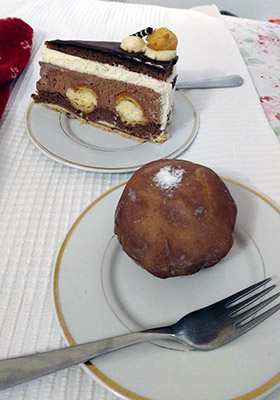 We then walked just a few blocks to dinner at Weinhaus Attwenger. Larry (the owner of Haus Hepi) recommended the place after finding out more of the type of ambience and food that we prefer. I must say that if we had known about this restaurant when we first arrived, we probably would have dined there all three nights! The food was absolutely outstanding! We started by sharing a salad with pears, seeds, and roasted walnuts along with some cream cheese filled gnocchi and sautéed vegetables.

For our mains, I got a combination of Char and Trout over a bed of vegetables in a yellow curry sauce, and Deb went with a salmon filet and shrimp (still in the shell) over a bed of tagliatelle pasta in lobster sauce. Both dishes were outstanding because the sauces were light and didn’t overpower the fish. With as lovely as the mains were, I think that the salad stole the show for both of us. 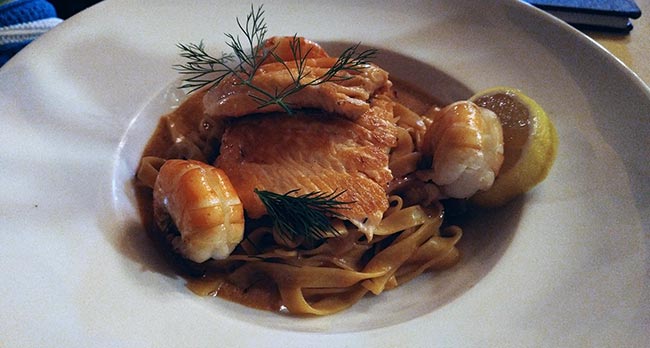 After dinner, we ventured over to the other location of Zauner (the one that is a restaurant and open later into the night), because they offer a dessert that I’ve wanted to try since we’ve been here: Kaiserschmarrn. Austrian Chef Wolfgang Puck, during an interview on the television show The Best Thing I Ever Ate, said that it’s one of his favourite foods. It’s basically shredded strips of pancakes that are lightly charred and crunchy on the outside, served with powdered sugar and stewed plums. It was delightful, but I think that I still preferred the salad from dinner. 🙂

We started on the ~25km drive southeast back to our room in Obertraun, and I had hoped to put fuel in the car before our early morning. However, the petrol station was closed. Oh well, there is always time in the morning. We enjoyed our takeaway desserts from Zauner, and of course, our wines of the evening. I went with the 2016 Domäne Wachau Pinot Noir, and Deb had the 2017 Domäne Wachau Federspiel Grüner Veltliner Terrassen. For me, this was the most ethereal and best of the Pinots that I’ve had on the trip… by far! Honestly, I had anticipated that the Schloss Gobelsburg Pinot Noir would be the game-changer for me, and though it was wonderful, this one from Domäne Wachau was able to compete with the featherweight elegance and precision of some of the great producers in Chambolle-Musigny!