Unfortunately, as with so many of our stays in Austria, we only had one full day in the Ciringa / Südsteiermark region, so we had to make the best of it by seeing some of the cool attractions. We drove about 45 minutes or so away to the town of Riegersburg to visit their castle. If you walk up the hill to the top (instead of taking the funicular) and forego the castle museums, there are no fees involved. However, we opted to take the lift for €6 and to see all three museums for €13. The lift was rickety and a bit frightening, but we made it! The castle was really a neat experience, and the museums (one about the castle itself, one about witches, and one about medieval arms) were informative, but they were primarily in German. The English pamphlets only gave basic overviews of each room, so I feel like we missed out on a lot of the fascinating details. Though the castle experience was fun, I think it was a bit overpriced. 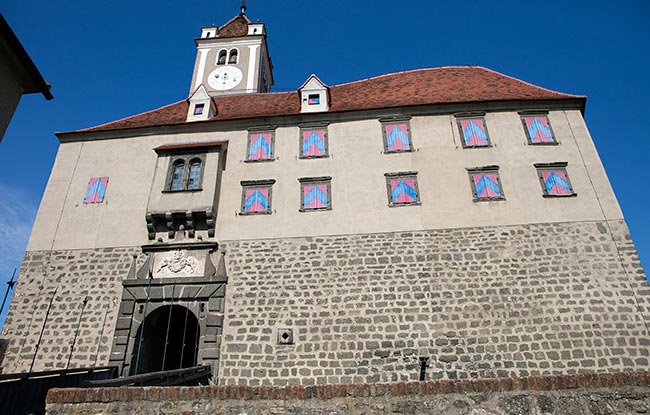 One of the most interesting aspects of the castle was the various ornate stoves in some of the rooms. I often forget that there was no such thing as central heating and cooling during these times, so it was certainly a must to have some form of heating throughout the castle during the winter months. These stoves likely provided ample heat for taking the chill out of the air, and at Riegersburg, they likely served as discussion pieces given their elaborate and intricate designs. 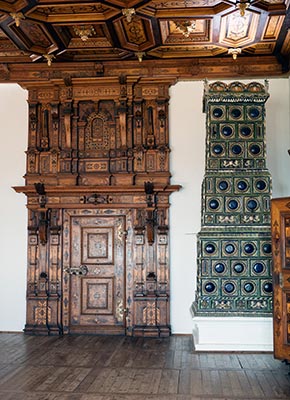 After going through the three museums, we spent a little time looking around the outside of the castle. The views of the surrounding areas were really beautiful and pastoral. Once finished with Riegersburg, we drove a little bit down the road to Zotter Schokoladen (a chocolate manufacturer) for a tour of their facility. It started with a really great video that outlined the chocolate making process beginning with harvesting the cacao pods. We then went through the factory with an English audio guide that explained every step of the process in a lot more detail. 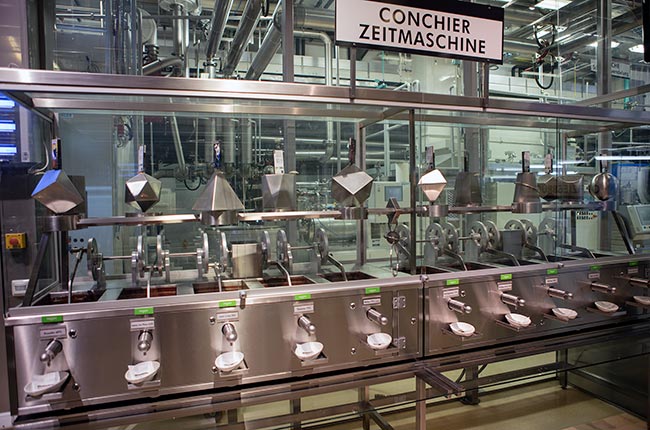 Südsteiermark – one of many chocolate machines at Zotter Schokoladen

During each stage of the chocolate production, we were able to taste the “chocolate”. I use the word “chocolate” loosely because at many of the stages in the process, it didn’t taste much like the chocolate that we’re all used to. We did, however, get the opportunity to taste a bunch of their finished products. Some were good, some were great, and a few were absolutely fantastic! Deb ended up getting this solid 72% Milk chocolate bar sourced from Peru, some white chocolate bark with pistachios and almonds, and we each bought one of the tasting spoons that we used throughout the tour. I didn’t buy anything because the one that I loved the most wasn’t available for purchase. It was called the White Goddess and was white chocolate with Tonka Beans and honey crisps. It looks like it’s available online, so I may consider it at some point. The other ones that I enjoyed were the coconut nougat and the white chocolate bar with coconut and raspberries. One aspect of Zotter that I really found fascinating was the number of vegan options that they had available. 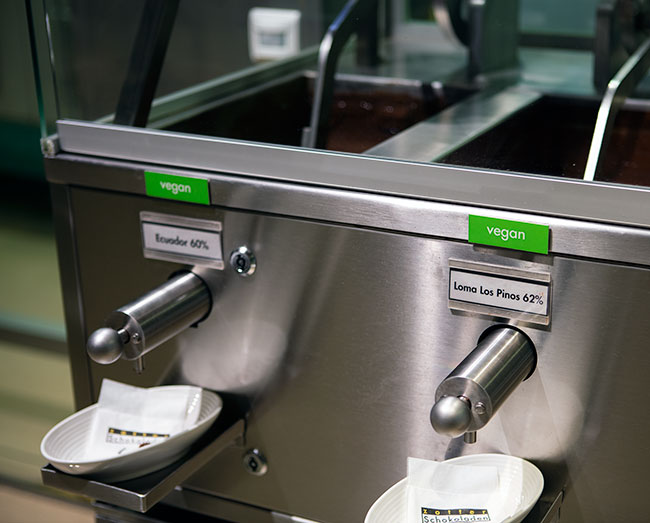 Südsteiermark – some of the vegan offerings at Zotter Schokoladen

At the tail end of the Zotter tour, there was a really great experience where they had large glass jars with various items that have rather distinct aromas (like rose petals, some baking spices such as cloves, and so on). The object of this particular hallway was to smell the contents of each jar and see if you could name the aroma without looking at the answer printed on the underside of the lid. Deb and I made it into a bit of a game by loosely keeping score, and I found it to be a lot of fun because many of the aromas that can be found in chocolate can also be found in red wines. As a side note, there was a really fun “chocolate bath” at the exit of the tour. Sadly, it was only for show, but I can imagine that chocoholics everywhere would swoon at the thought. 😛 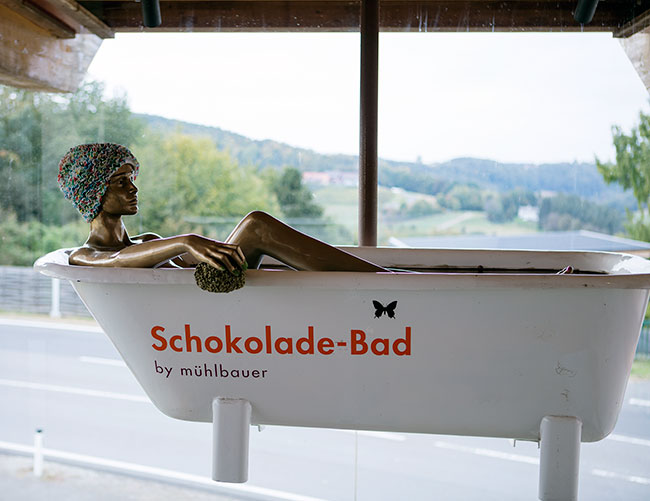 The other portion of the Zotter tour is a farm / petting zoo, but darn the bad luck, it started raining so we didn’t get a chance to go through it. After Zotter, we went back to the same restaurant that we ate at the previous night (Kirchenwirt an der Weinstraße in Ehrenhausen) because we enjoyed it so much! We didn’t have the same waiter this time, and our waitress tonight spoke VERY little English. It made it more difficult to order, but everything came out like we wanted. We each started with the mushroom tartare (which was my favourite), and then Deb went with Wiener Schnitzel and I had a custom order similar to what she had the evening before. I ordered the Pork Medallions, but without the pork. I know, it sounds ridiculous, but I wanted the dish with just a boatload of trumpet mushrooms and some extra German pretzel dumplings. I ordered by using Google Translate on my mobile, and my custom dish came out just as I had intended. Success! 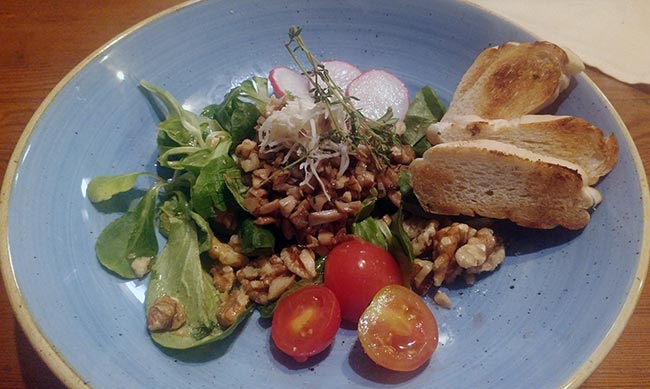 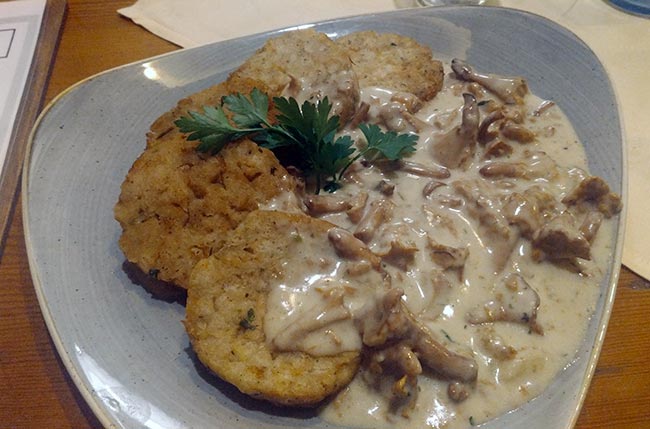 Back at the beautiful chalet, we enjoyed our wines of the evening. This time we went with two of the special, limited production wines from Weingut Tement. We wanted to compare two of their higher-end Sauvignon Blancs, so we had a bottle of the 2012 Zieregg “IZ” Reserve and a bottle of the 2015 Zieregg Vinothek Reserve. I thought that Deb would like the Vinothek and that I would like the “IZ” (which is made via a process similar to carbonic maceration [often used in Beaujolais]), but I had it completely backwards. I preferred the Vinothek and Deb liked the “IZ” more. I found the Vinothek to be a more pure expression of the grape and the place, which are two aspects that I highly value in wine.

Government is not the doctor. It is the disease.