Just last week, while at the grocers, I noticed that Weight Watchers had put out a new ice cream novelty. I like a lot of their ice cream, and especially the novelties, because they tend to use skim milk in their ice cream as well as a lot of whole ingredients instead of processed junk. They also tend to be quite tasty, and significantly better for you than their standard counterparts. This new product also looked like it would be something that I would really enjoy, as it combined a few of my favourite things: cheesecake, ice cream, and graham crackers: 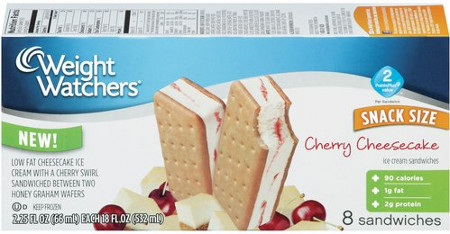 Looking at the box, I thought “hmmmm, these are pretty expensive considering the size of the box.” Many of the Weight Watchers products are a little pricey, but they are generally worth it. Then I noticed the box indicated that there were eight ice cream sandwiches inside! Eight?! Indeed, there are eight… eight very small (“Snack Sized”) morsels. That brings me to my first qualm with the product: 90 calories and 1g of fat doesn’t seem all that bad, except that they are so small that they actually challenge my portion control tactics–I feel like I should eat two of them. As such, that puts the treat (for me) at 180 calories, 2g of fat, 28g of carbs, and 20g of sugars: 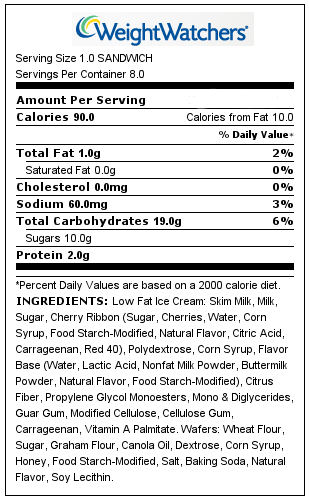 For that amount, there are other treats that I would rather have. Now, as for the taste, they aren’t bad, but certainly not my favourite product from the company. The ice cream in the middle tastes primarily like standard vanilla, but every now and again, I would taste a hint of the “cheesecake” flavouring. The cherry is pleasant, but can sometimes overpower the rest of the taste. My least favourite part is the graham cracker crust. The flavour is there, but the texture is a little off-putting to me; it’s somewhat gritty.

Overall, I would probably buy the product again, but I would hope that Weight Watchers will invest some time in refining both the taste and texture. They did that a while back with their regular ice cream sandwiches, and the new ones were vastly improved compared to the originals.

We don't always get to choose what we love.