This is a workaround for a FreeType/fontconfig problem, but my be applicable in other cases as well. For Gentoo users, the related bug is 631502.

Come to find out, this was due to a change in the content rendering engine, which is briefly mentioned in the release notes for Firefox 52 (but it also applies to Thunderbird). Basically, in Linux, the default engine changed from cairo to Google’s Skia. 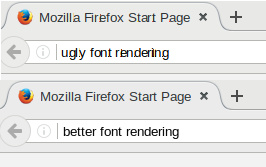 For each application, the easiest method for getting the fonts to render nicely again is to make two changes directly in the configuration editor. To do so in Firefox, simply go to the address bar and type about:config. Within Thunderbird, it can be launched by going to Menu > Preferences > Advanced > Config Editor. Once there, the two keys that need to change are:

They likely have values of “skia” or a comma-separated list with “skia” being the first value. On my Linux hosts, I changed the value from skia back to cairo, restarted the applications, and all was again right in the world (or at least in the Mozilla font world 😛 ).

Staying busy is a piss-poor alternative to being happy.