Italy Day 6: Montalcino, 2 wineries, and dinner in a quaint town

After four days in Rome, it was time to head northwest to Tuscany, which is arguably one of the best wine macroregions in the world. We checked out of the Assunta Domus hotel, and Alessandro (the inn keeper) hailed a taxi for us. We took the taxi to the Hertz car rental location near Borghese Park. The rental process went fairly smoothly, and we left the car park with a Renault Kadjar. The vehicle was larger than I had anticipated, and that isn’t great for travel within European cities, but we will make it. 🙂

We took the motorway to a small town that is southeast of Siena known as Monteroni d’Arbia. We had booked reservations at a little bed and breakfast called Casa Bolsinina. It was an absolutely beautiful property that took our breath away right when we first saw it! 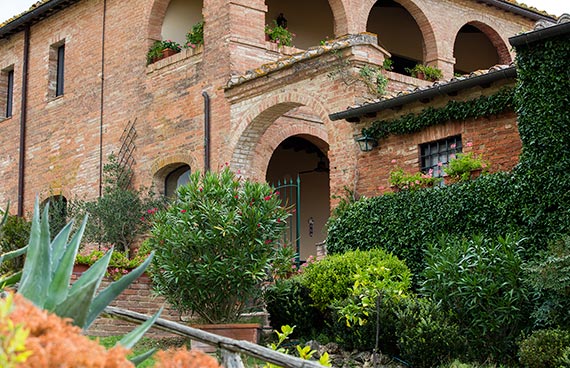 After dropping off the luggage, and getting unpacked, we drove ~20km (~30 minutes) to Siena. Siena is a city where there are many ZTLs (Zona Traffico Limitato), which are places where you may not drive or park. As such, it really makes sense to just park your car. For Siena, one of the best places to do that is the Il Campo parking garage. It’s only €2 per hour, and is just a short walk from main square of Siena, Piazza del Campo. After just standing in awe of the beauty of the square, we had some coffee and hot tea at a little cafe.

We bought tickets (for €10 each) to ascend Torre del Mangia, which is one of the highest vantage points in the city. You really can’t miss it from just about anywhere near Siena: 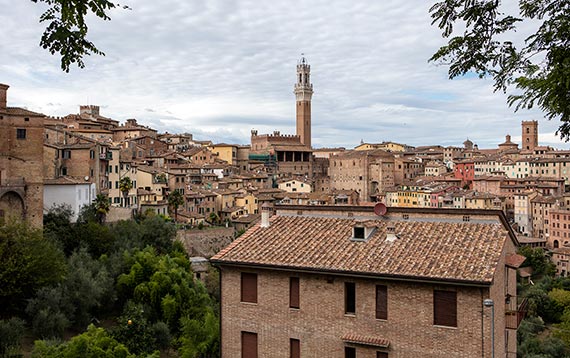 Though my fear of open heights came fully into play at the top of the tower, the views of the city were absolutely worth both the climb of the narrow staircases… and the subsequent heart palpitations. 😉 The weather definitely elevated my fear, though, because it had started to rain and the wind was very strong! Like I said, though, the views made up for it: 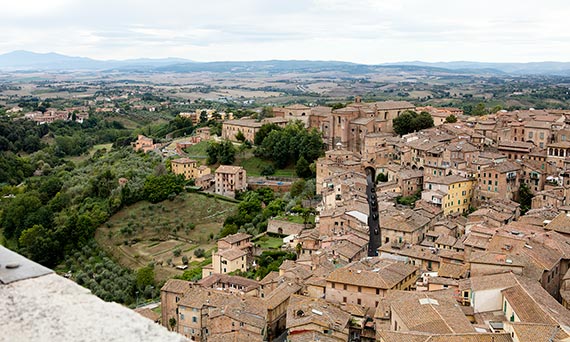 After coming down from the tower, the winds and rains had really picked up, and it was actually starting to get a little chilly. I hadn’t anticipated that large of a drop in temperature, but that goes to show what the rain can do. We walked to Ristorante San Domenico for our dinner reservations. The food was a little hit or miss. Some of the dishes were great, and some were nothing more than mediocre. The two that stood out to me were the Gnochetti tartufati (gnocchi with truffle sauce) and the Pizza rustico (white pizza with potato and rosemary). The truffle sauce was delicious, but there may have been just a little too much of it. That being said, the extra was great on some traditional coarse Tuscan breads.

Before heading back to the hotel, we stopped at Gelateria Brivido for some gelato. It was extremely expensive by comparison to the other gelato that we’ve had thus far, but at the same time, it was delicious. Deb got Nutella, and I chose black cherry and cream. Both came with a very fresh cookie sticking in it.

When we got back to Casa Bolsinina, we were warmly greeted by the two owners (Maria and Marcello). They are, without a doubt, two of the most accommodating hosts I’ve ever met in my years of travel! Seeing as Marcello is a Sommelier, I asked if I could see his wine list. I was completely shocked to see the amount of 1997 Brunellos that he had available! 1997 was claimed to be one of the better vintages of recent times, and though they may have passed their prime a little bit, I will likely never again have the chance to taste them. I went with 1997 Poggio di Sotto, and Deb had the Friulano (which is actually a renamed Sauvignon Vert) from Schiopetto. 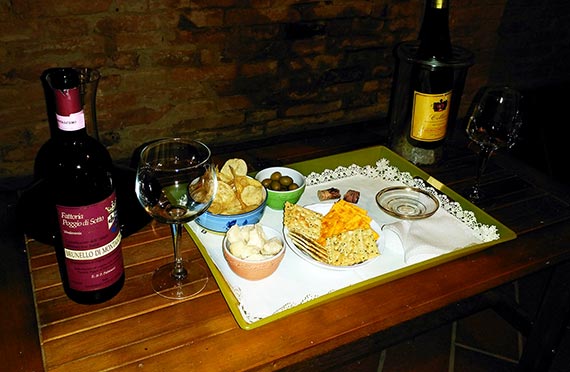 To go with our wines, Maria made us a lovely tray of snacks which included crisps, peanuts, crackers, and cheese. She brought it up to the terrace near our room, so we were able to sit and enjoy the wines in the cool and crisp air of Tuscany. It was a blissful experience, and one that I’m sure we will be repeating whilst we’re here! 🙂

The secret of happiness is to make others believe they are the cause of it.