In the third instalment of “Introduction to Wine,” we covered the different growing periods for the northern hemisphere. In this final chapter, I want to briefly demystify some of the components of a wine label, and discuss optimal conditions for storing wine in your home.

To get us started, let’s talk about wine labels and all the pieces of information that you might find on one. First thing’s first, though, there are huge differences between the label format of a “New World” wine and an “Old World” wine. We’ll start with the “New World” wines, which are the ones that are produced in areas outside of the traditional wine-growing regions of Europe and the Middle East. In particular, many New World wines come from the United States (primarily the West Coast), Australia, New Zealand, South America (with emphases in Argentina and Chile), and South Africa. 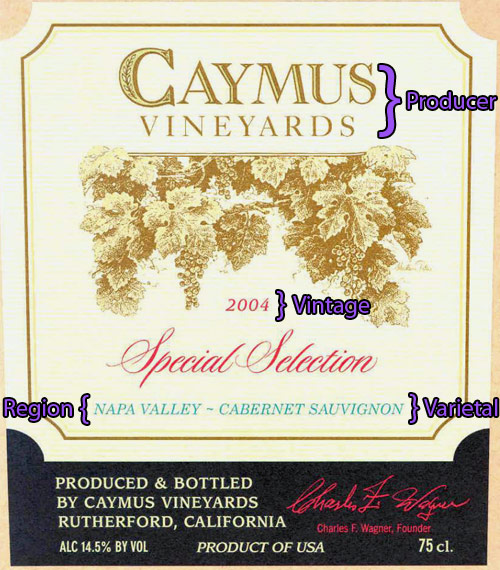 As you can see from the image above, New World wines feature the producer’s name most prominently on the label. The region (Napa Valley, in this case) and varietal (which is the type of wine [in this case, Cabernet Sauvignon] are not nearly as demanding of your attention as the producer. Also, the vintage (which is the year that the wine was produced) is not a focal point of the label. These four parts (producer, region, vintage, and varietal) are the main components of a wine label, but there are other pieces as well. Some of the other information includes the alcohol content, the founder of the vineyard, and the country of origin, and the quantity of the bottle (in this case, the standard 75cl or 750ml).

In contrast to New World wines, Old World wine labels shift the focus more to the region and varietal than to the specific producer. As you can see below, the varietal is at the top of the bottle and the region directly below it; sharing the largest typeset. In general, Old World wine labels emphasise the region and then the varietal, but there can be some overlap between the two. The producer is generally not as prominent, and is often toward the bottom of the label, or even on a separate label elsewhere on the bottle. 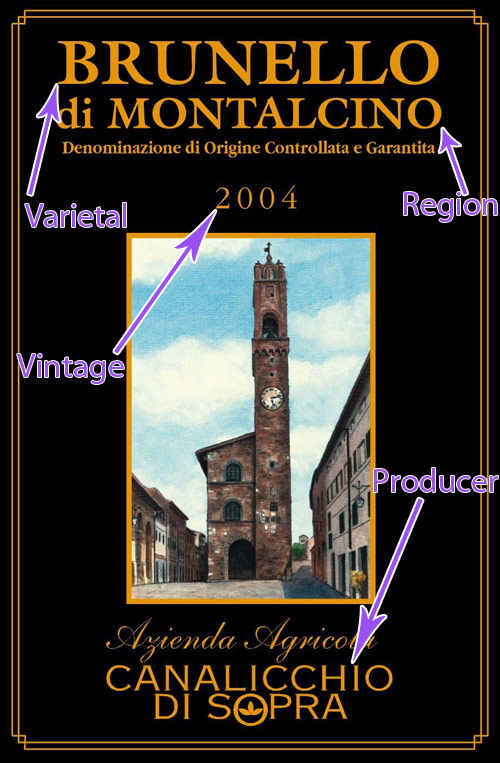 Will all New World and all Old World labels be set up in this exact format? No; different producers will stylise the labels in their own way. That being said, they tend to follow similar patterns of prominence.

Shifting very briefly to wine storage, there are a couple main points to consider when looking for that “just right” spot to house your wines:

Simply put, you will ideally store your wine in a dark, cool place (like a cellar) in which the temperature seldom changes. That last point is important as well. Many people think that wines have to age, and the longer that they do, the better they will taste. While there are some wines that develop flavour complexities and subtleties over time, not all of them do. Further, wines will hit an ideal age, and it is possible to let them sit for too long. What happens is that the flavours can mellow to the point of muddiness, or worse yet, dullness. Also, many New World wines are meant to be enjoyed shortly after bottling or purchasing. So, unless you are quite certain that the wine you have will improve with time, pop the cork and enjoy! 🙂

I've come to the frightening conclusion that I am the decisive element in the classroom. It's my daily mood that makes the weather. As a teacher, I possess a tremendous power to make a child's life miserable or joyous. I can be a tool of torture or an instrument of inspiration. I can humiliate or humor, hurt or heal. In all situations, it is my response that decides whether a crisis will be escalated or de-escalated and a child humanized or de-humanized.