Recently, when I was browsing the interesting artists on the FiXT Store (which specialises in electronica, techno, electronic rock, and similar genres of music), I stumbled upon an artist that I had never even remotely heard of. Their band name is really disturbing to me; almost to the point that I passed on listening to them (but that would really be preemptively judging, now wouldn’t it?). I would summarise Blood Stain Child as a hard-hitting crossover between metal, J-Pop, and electronica that is topped off by incredible female vocals. 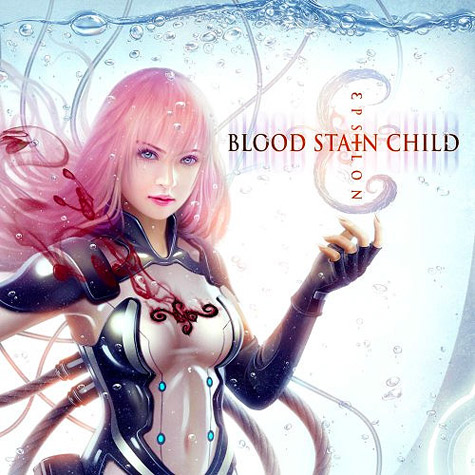 1. Sirius VI – 9 / 10
Right from the start, you get a feel for the eclectic mix of hardcore, J-Pop, and electronica that makes this album incredibly unique. There is pounding guitars, bass, and drums mixed with some synth and the combination of screams and a piercing female voice. The sound is somewhat like organised chaos that all seems to fall into place during the chorus. A great introductory track that sets the stange for all that is to come.

2. Forever Free – 10 / 10
This track starts off with just synth and drums, but quickly introduces the hard-hitting guitars and screams. The verse is primarily the screamer and the whispy female vocals in the background, which makes it somewhat dissonant. However, that dissonance only makes the consonance of the chorus that much stronger. The bridge features a mild guitar solo, and then a somewhat more prominent one thereafter. In the last minute of the song, the guitarists pick up the pace a bit, and the song closes with primarily synth and drums. Overall, this is on of my absolute favourite tracks (especially during my long runs).

3. Stargazer – 10 / 10
Starting with a dance-style intro, and going into a very melodic verse with only female vocals, Stargazer sounds more poppy than the previous two tracks. The chorus continues the easy-flow of this song, and one really has to listen for the musical subtleties that are sprinkled throughout the background of the track. The breakdown and subsequent rebuild during the bridge are perfectly structured, ending with a guitar solo that transitions into a heavily-mixed vocal part with lots of effects. As the title may imply, this track is stellar.

4. SOPHIA – 10 / 10
This song starts with a very catchy mix of synth strings, beats, and vocals, and leads into a faster beat with heavy guitar riffs during the verses. The chorus really elevates the song to a new level, incorporating storytelling lyrics and high-pitched vocals that contrast the low-end crunch of the band. Just when you think you know where the song is going, it breaks back down into the synth strings and beats. It ends with another strong repeat of the chorus and fades…

5. Unlimited Alchemist – 9 / 10
The mix in the beginning of this track isn’t as clean as it is on some of the previous ones, but still shows the band’s ability to contain their energy and structure it accordingly. The guitarists and the keyboards seem to all do their own things during the verses, but yet they still sound like they are playing off of one another. The mix really cleans up during the bridge, and allows you to hear all parts–the rhythm guitars, the keyboards, the beats–clearly. It finishes in about the same place that it started, but ends a bit abruptly.

6. Electricity – 9 / 10
Great pop-electronic feel in the beginning with strong synth, rhythmic guitars, and equally following vocals. Except for one very brief period around 1’50”, this track remains at the same aggressive pace throughout, and never misses a beat. It carries with it a strong current that certainly lives up to the title, but the vocals are not as impressive as in some of the other songs on the album.

7. Eternal – 10 / 10
From the mood-building introduction of the track, one can almost feel the musical eruption that is coming. The verses are primarily comprised of screams and dissonant guitars, with the chorus being filled with pure female leads and heavy double-bass drum beats. There is a great break-down during the bridge that lasts for several measures, leading back into the same power of the post-introduction verse, (but with the addition of some incredibly reaching vocals and two nice solos).

8. Moon Light Wave – 10 / 10
The shortest track on the album starts with a guitar part that mimics the vocal patterns presented in the upcoming chorus. The mix of heart-pounding hardcore (in the vein of All That Remains) and ear-popping beats makes this another fantastic track on the album. My favourite part is that around 2’15”, it seamlessly changes key. The only problem with the song is that it’s simply too short.

9. Dedicated to Violator – 7 / 10
The introductory vocals seem a bit overmixed, which makes it difficult to understand the lyrics. In this track, the loud crunch of the guitars is overtaken by the synth and drum machine. They are still there, but very faintly in the background as if only to provide some structure to the track. About halfway through, there is a nice piano portion that picks up, and a short lead line from one of the guitarists, which then shifts back into the pop-sounding chorus. Though it is a good track, it seems to fall short of the momentum that had been building with the eight tracks leading up to it (though it does indicate versatility).

10. Merry-go-Round – 10 / 10
The techno-esque start with pitch-bending synth is followed by a guitar hit that is likened to being musically punched in the face. The verses have nice blend of strong vocals and muddied screams, as well as subtle musical segments followed by hard riffs. To me, this is one of the perfect mixes of metal and pop that I’ve heard in ages. Since the song pivots between the two styles, the title seems to be another tie-in. If I thought it ethical, I would give it an 11 out of 10, but I’ll refrain. 🙂

11. La+ – 8 / 10
The opening verse (especially how the vocals are juxtaposed with the rhythm guitars) reminds me a bit of a harder Evanescence. This is one of the few tracks where I feel like the guitar solo actually detracts from the overall sound. The song seems a bit choppy throughout, and the solo exacerbates that lack of fluidity.

12. Sai-Ka-No – 6 / 10
This song can be seen in one of two lights. It can be seen as COMPLETELY out of sync with every other track on the album. Conversely, it can be viewed as the acoustic, mellow ending song that further demonstrates the band’s ability to change things up. However you would like to view it, it does feel a little odd when compared to the other tracks, and in my opinion, is out of place given the bonus track to follow.

13. Royal Sky – 9 / 10
Back to the typical sound that tied many of the tracks together, Royal Sky drops the tempo a little bit, but leaves the hard-hitting metal rhythms unscathed. In my opinion, this should have been the standard closing song and, as such, taken the place of Sai-Ka-No before it. The slower pace without sacrificing aggression provides a perfect finale.

This album is nearly perfect in its eclectic and unique mix of musical styles, and is fantastic as a workout album (especially when doing something that is aided by repetitive rhythm and blood-pumping guitar crunch). It seemed like too odd of a blend to be positive, but it really worked for me. I urge you to at least check out some of the minute-long, free, sample tracks over at FiXT.