This past Saturday (17 November 2012), I participated in the St. Jude Children’s Hospital Give Thanks Walk. This year was a bit different than the previous ones, as it also had a competitive 5k run (which was actually a 6k). I woke up Saturday morning, hoping that the weather report was incorrect, and that it would be much warmer than they had anticipated. However, it was not. When I arrived at the race site (which was the beautiful Creve Coeur Lake Park [one of my absolute favourites in the area]), it was a bit nippy at 6°C. However, the sun came out and warmed up everything a bit. Come race time, it wasn’t actually all that bad, and at least it wasn’t raining or snowing. 🙂

When I started the race, I was still a bit cold even with my stocking cap. However, by about halfway through the 6k, I had to roll up my sleeves because I was sweating pretty badly. It was an awesome run, and I felt great at the end of it. I think that the best part was being outside with a bunch of people that were also there to support an outstanding cause like Saint Jude Children’s Hospital. There were some heartfelt stories from families of patients, and nice conversations with fellow runners. 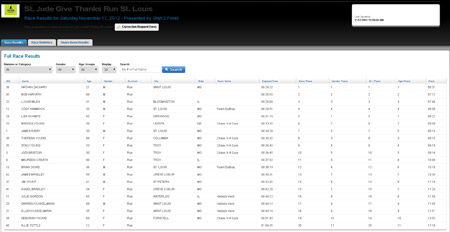 In fact, it put me in first place, with 2’33” between me and the runner-up! Though coming in first place wasn’t a goal of mine, I was in competition with myself. I had set a personal goal of completing the 6k in 26’30” and actually came in under it! My placement earned me both a medal and a great certificate: 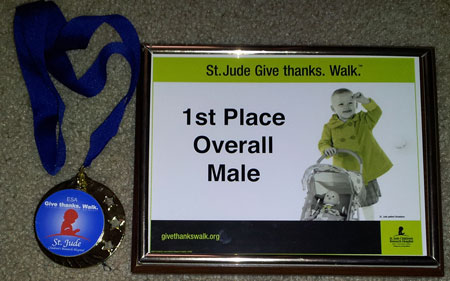 After the announcements of the winners and thanks to all of the sponsors, the female first-place runner (Lisa Schmitz) and I had our photo taken together in front of the finish line: 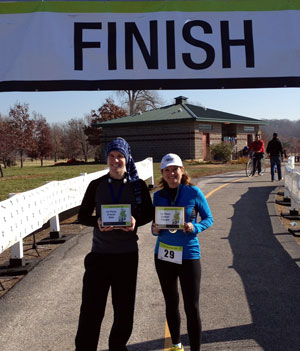 Thank you to everyone that sponsored and supported me for this run! The children and families of Saint Jude received tens-of-thousands of dollars just from the Saint Louis race alone!

Children are like wet cement. Whatever falls on them makes an impression.