Analytical Report on the validity of United States democracy

My goal is to keep this entry as short as possible while still maintaining the level of total enthusiasm that I have towards this film. In Lord of War Nicholas Cage plays a Ukranian immigrant named Yuri Orlov that decides his life isn’t really going in the direction he would like. He chooses to get out of the family-owned restaurant business and partake in the illegal activity of gun-running. Throughout the movie you see Yuri’s struggle between his multiple identities and maintaining a level of respectability to his wife and child. Not only does Lord of War provide an amazing insight into the psychological battles of illegal activity, but it also looks at the vast corruption of the five main countries of the United Nations–China, France, Russia, the United Kingdom, and of course, the United States of America.

Before I end my, what I feel to be concise, review of such an incredible movie, I feel obligated to share some of the powerful quotes from the film:

Yuri Orlov: There are over 550 million firearms in worldwide circulation. That’s one firearm for every twelve people on the planet. The only question is: How do we arm the other 11?

Yuri Orlov: I sell to leftists, and I sell to rightists. I even sell to pacifists, but they’re not the most regular customers.

Yuri Orlov: There are two types of tragedies in life. One is not getting what you want, the other is getting it.

Yuri Orlov: After the Cold War, the AK-47 became Russia’s biggest export. After that came vodka, caviar, and suicidal novelists.

I could go on for about another 10 pages, but I want to leave some of the little treasures of the movie for you to witness first-hand! 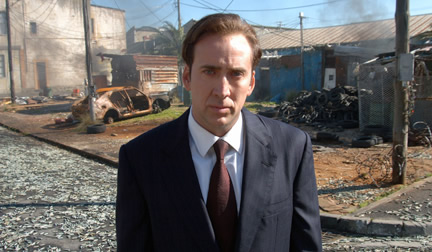 My opinion of Lord of War, if you haven’t already figured it out, is that it is one of the few movies of the past 10 years to deserve a 10/10! Awesome job to EVERYONE involved in its production.

A single death is a tragedy; a million deaths is a statistic.