Accomplishments of the day

Last night I went down to see the New Line Theatre production of Johnny Appleweed. It was the world premiere of the new musical comedy by Scott Miller. I knew it was going to be good, but I didn’t know it would be that liberal. It was absolutely incredible! Johnny Appleweed is the new hero of America, traversing the country planting and sharing the wonderful weed that is marijuana. He thinks that the current President of the United States is really screwing things up for everyone, and plans on going to the White House to express his discontent.

Along the way, he runs into Mark (an uptight Republican struggling with his sexual orientation), Suzanne (a lesbian thespian who’s ticked at her girlfriend), Fannie Mae (a twice-divorced born-again Christian), and none other than Jesus himself. They all go with Johnny on his journey to confront President Bush Birch about the current state of the Union. 🙂

Unfortunately, the show’s initial run is over now, but I sure hope it makes a return in the near future. I would love to see this awesome political satire again…and again…and again. Yet another stunning New Line production! 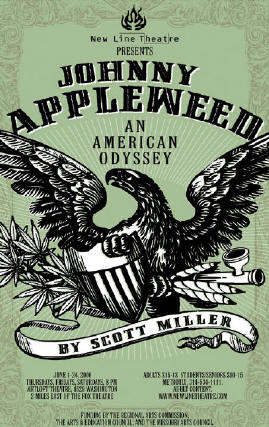