Brooks Ghost 4 running shoes make the difference for me

Though I have been aggressively running for the past two years or so, I’ve always used generic “running” shoes (Adidas, Nike, et cetera) from a standard department store. Yesterday, I made the plunge and visited a local store that specialises in running gear. After talking with one of the specialists for about 45 minutes or so, and trying on seven or eight pairs of shoes, I decided to go with the Brooks Ghost 4: 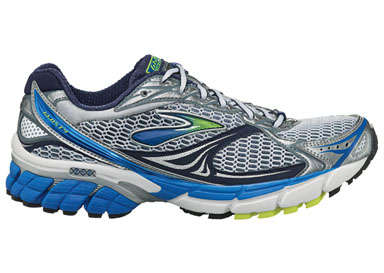 According to the representative at the store, I didn’t need any type of corrective shoe, as he said my form was fine–no signs of overpronation or supination. Therefore, I went with a neutral shoe, and ultimately decided on the Brooks Ghost 4 due to its structure. Some of the other shoes were very nice as well, but the Ghost 4 seemed to have the most support in the areas that I want; namely, the heel, around the ankle, and along the sides of the arch. Further, they provided a slight elevation in the back, which forced me to keep a generally form instead of starting to slouch.

Today was the first full run during which I wore my new shoes, and the difference was unbelievable! Firstly, I ran 14.5 km (~9 miles) instead of my usual 13 km (~8 miles). Secondly, I did so at a slightly faster pace than normal (about 0.2 kmh [0.12 mph] faster). Thirdly, and most importantly, I felt no pain during or after the run! Generally, my ankles and knees hurt throughout the last 25-30% of the run, and for several hours thereafter. Today, I felt refreshed and had the usual endorphin rush, without the pain that usually accompanies those two positive aspects of running.

So my run from today was:

Only time will tell how these shoes hold up, and whether or not they continue to provide the outstanding support throughout the critical areas. Overall, though, I couldn’t be happier with the shoes! I encourage any of you that are starting to get serious about running to go to a local running shop, and try on a bunch of shoes. Though the Brooks Ghost 4 shoes work wonderfully for me, they may not be the right shoe for you. Try them on until you find the one that is just right.

A boy carries out suggestions more wholeheartedly when he understands their aim.