All That Remains – For We are Many review

The album may not be all that new (seeing as it was released on 12 October 2010), but I just recently added it to my collection. After having listened to it several times now, I think that I have a solid understanding of the direction of the album. 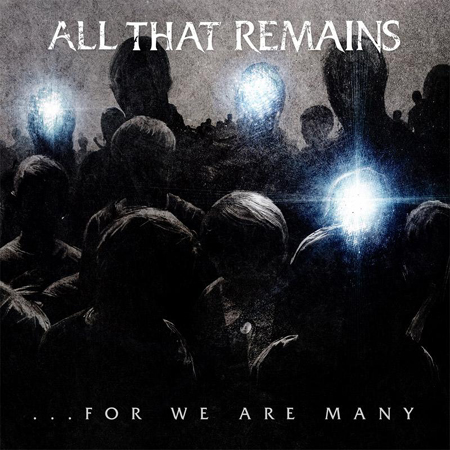 1. Now Let Them Tremble – 7 / 10
As an introductory track, it encompasses the sound that is so distinctly ATR–progressively building beats, bass, and guitars that lead to a climactic “NOW LET THEM TREMBLE!”

2. For We are Many – 6 / 10
A great opener that would easily get crowds riled and ready to go during a live show. Musically, it is a little repetitive and bland, but it could be seen as somewhat of an anthem for the album.

3. The Last Time – 10 / 10
Vocally, this song sounds more like the ones featured on their previous album Overcome, which in my opinion, is great. The chorus is incredibly cadential, and lyrically powerful. The bridge, which showcases a great solo backed by great rhythm, is followed by a nice musical breakdown that leads abruptly back into the chorus.

4. Some of the People, All of the Time – 8 / 10
Heavy-hitting from the very beginning, this song doesn’t let up until it’s over. During the verses, it is a bit choppy, but that juxtaposes perfectly with the smooth chorus. In the bridge, “We will not be neglected” is screamed a few times, and is followed by a drastic drop in tempo which concludes the track somewhat unexpectedly.

5. Won’t Go Quietly – 8 / 10
During the bridge of this track, the guitar soloist uses a Heil talkbox, which adds a sound that I’m not used to hearing on other songs by ATR. The solo continues and fades out until the track’s end, which is in stark contrast to the conclusion of the previous track.

6. Aggressive Opposition – 9 / 10
The guitar phrasing during the chorus works really well with the vocals; the beat changes during the bridge, but the same style vocals remain. The lead-in from the bridge into the guitar solo is seamless. This song features all the components of quality hardcore.

7. From the Outside – 10 / 10
I really enjoy the alternating screams and clear vocals during each verse, and the hard-hitting bass drum repetition during the chorus. The bridge builds from bass and a guitar solo into having full drum and rhythm guitar backing, which adds a musical aura that can only be triumphed by leading back into the chorus. One of my favourite tracks on the album.

8. Dead Wrong – 4 / 10
An audio assualt from the second the track starts, Dead Wrong features a prominent bass line and repetitive hits on both the double bassdrum and snare throughout. Overall, though, I think the song falls a little flat by comparison to some of the others on the album.

9. Faithless – 10 / 10
Faithless starts with a great combination of rhythm and lead guitars, and leads into an awesome melodic chorus with iced vocals. The bridge breakdown and subsequent rebuild thereafter segway into one of the best guitar solos on the disc, and overall, the track seems to be one of the more thought-out on For We are Many.

10. Hold On – 10 / 10
The classic ATR where rugged and disonant verses seamlessly flow into the cadence of the chorus. The only downside to this track is that it seems like they were just getting warmed up when it ends at a mere 2’57”.

11. Keepers of Fellow Man – 9 / 10
Like the two tracks before it, Keepers of Fellow Man is structured with powerful verses that are followed by an almost anthem-esque chorus. It continues the strong closing pattern of the album, but has a couple moments where the guitars and vocals seem to clash.

12. The Waiting One – 10 / 10
As the closer of the album, The Waiting One is the longest track and follows in the vein of Believe in Nothing from their previous album Overcome. It is a great, somewhat more mellow song, but leaves me wanting more… which may be intentional.

Overall, For We are Many is an excellent fifth studio album from ATR; it has some tracks that aren’t on par with some of their more prominent work, but all are good in their own respect. At a total of 101 out of 120 points, it would really be an 8.4 release, but alas, I am relegated to whole stars and half stars. Thus, an 8.5/10:

It is dangerous to be right in matters on which the established authorities are wrong.